Inspired by my awesome cousin Debbie, I embarked on the Halloween season in a crafty state of mind. 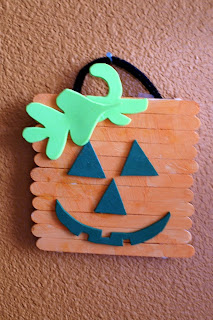 Ethan's popsicle stick pumpkin. He was given a lot of supervision and guidance. 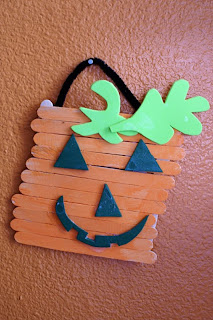 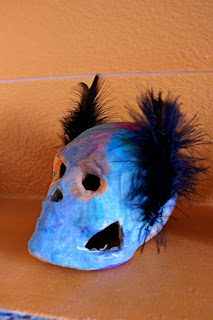 (Gabriel painted a wooden bat - but Duncan promptly ate one wing and half the body.) 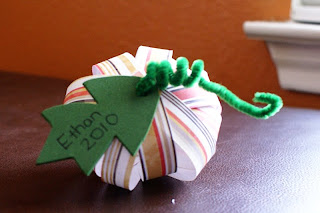 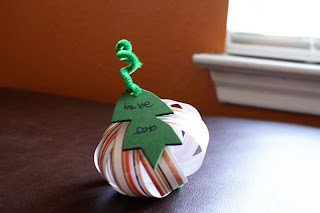 Gabriel's paper pumpkin. Normally his handwriting is quite legible. I don't know what happened here. 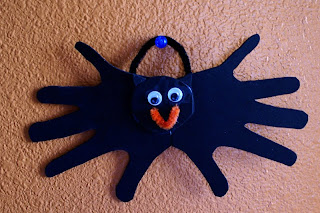 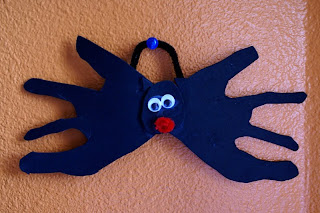 Gabriel's hand bat. Once again, I tossed him the scissors and glue and wished him luck. I guess it pays to be the baby sometimes. 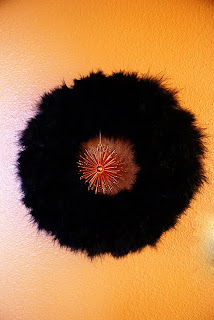 Once again, finding inspiration from the craftiness of others, I made this Halloween wreath from the directions by Suburban Matron. Something about mine looks really .... homemade. I can't quite put my finger on it. 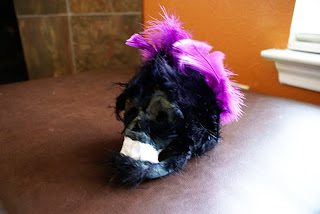 This is the skull I decorated. Since I was in the feather dept of Michael's anyway, I loaded up. And you know what? Sometimes, things look better in our heads then in person - this was one of those times.

The boys also made Halloween bats and owls out of those little puff ball thingys with googly eyes and everything. Heavy sigh... Duncan got a hold of those too.
Posted by Bex at 8:43 PM

I LOOOOOVE the handbats!!!! Super cool!!! What a good mom organize this. Love you!

It all looks so cute! I think the wreath looks great, I love that ornament.

Those paper pumpkins especially--I have got to try that. It looks tricky, your boys have skillz!

for a different kind of girl said...

I love the handbats, too! I miss having little boys in the house to do fun projects like this. My youngest might join me, and my oldest might, too, but only if I locked the front door and closed the blinds so any of his friends who came knocking didn't catch him in the craft act!

Wow, you are really crafty. Makes me hate you just a little.

So what you are telling us is that your Dog ate your homework? I'm going to borrow these ideas, for a birthday party activity on Saturday. Me and 12 kids?

I love those popsicle stick pumpkins! That looks like a craft even I could attempt...

I made the same hand bat with Emmy--but I did the scissor work!

These are so much fun! Love the feather skull & those bats are too cute

He is a Racker, LOVES his job. He craves the great outdoors and riding his motorcycle. The kids are crazy for their dad. They love to wrestle and play. Mom is good for cuddles and hugs; but to really have fun, dad is the one to go to!

Dislikes: new people, being told what to do, olives, anything that is not his idea * Resolution For Women by Priscilla Shirer
* Beautiful Outlaw by John Eldredge
*Imagine by Jonah Lehrer
State of Wonder by Ann Patchett
*Passport Through Darkness by Kimberley Smith
The Art of Racing in the Rain by Garth Stein
A Dirty Job by Christopher Moore
The Great Gatsby by F. Scott Fitzgerald
The Litigators by John Grisham
*Let's Pretend This Never Happened by Jenny Lawson
*Cracks in my Foundation by Marian Keyes
She Walks in Beauty (poems introduced and selected by) Caroline Kennedy
The Lacuna by Barbara Kingsolver
Island Beneath the Sea by Isabel Allende
Where We Belong by Emily Giffin
the Handmaid's Tale by Margaret Atwood
Last to Die by Tess Gerrison